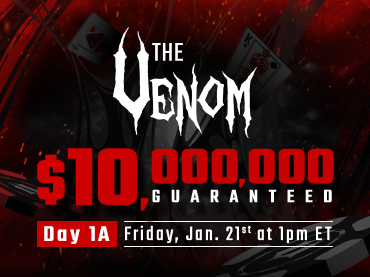 Americas Cardroom is bringing back the $10 Million Venom tournament from January 21st to February 2nd.  Once again, this multi-day event is the biggest online poker tournament offered by a US-facing site.

While the $10 Million in guaranteed prize money is enough to get anyone’s juices flowing, it’s the seven-figure prize that’s commanding all the headlines. Yes, the winner will really walk away with at least $1,000,000.

Don’t have the High Roller Entry?

No worries – Americas Cardroom thought of us all!

How do you make the world’s biggest online tournament for US players even hotter? With Venom Fever, that’s how. It’s the fastest and easiest way into the $10 Million Venom, with MEGAs running almost daily from Sunday, January 2nd through Sunday, January 30th — and it starts at just $0.

That’s right, free.  How you ask?  Because most of the MEGA satellites have a 3-step approach to get into.  Kick things off by playing a freeroll satellite that guarantees 10 seats to a Super satellite.  Win one of the 10 seats in the Super Satellite and you’ll play in a target Mega Satellite to take home a $2,650 Venom seat and your ticket to life-changing cash.

We’re guaranteeing over 750 seats to the $10 Million Venom through Venom Fever.

First of the Elite Stormers have arrived! 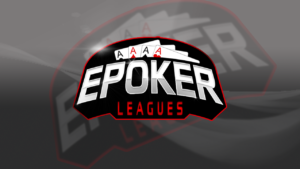 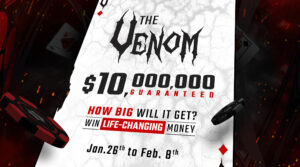